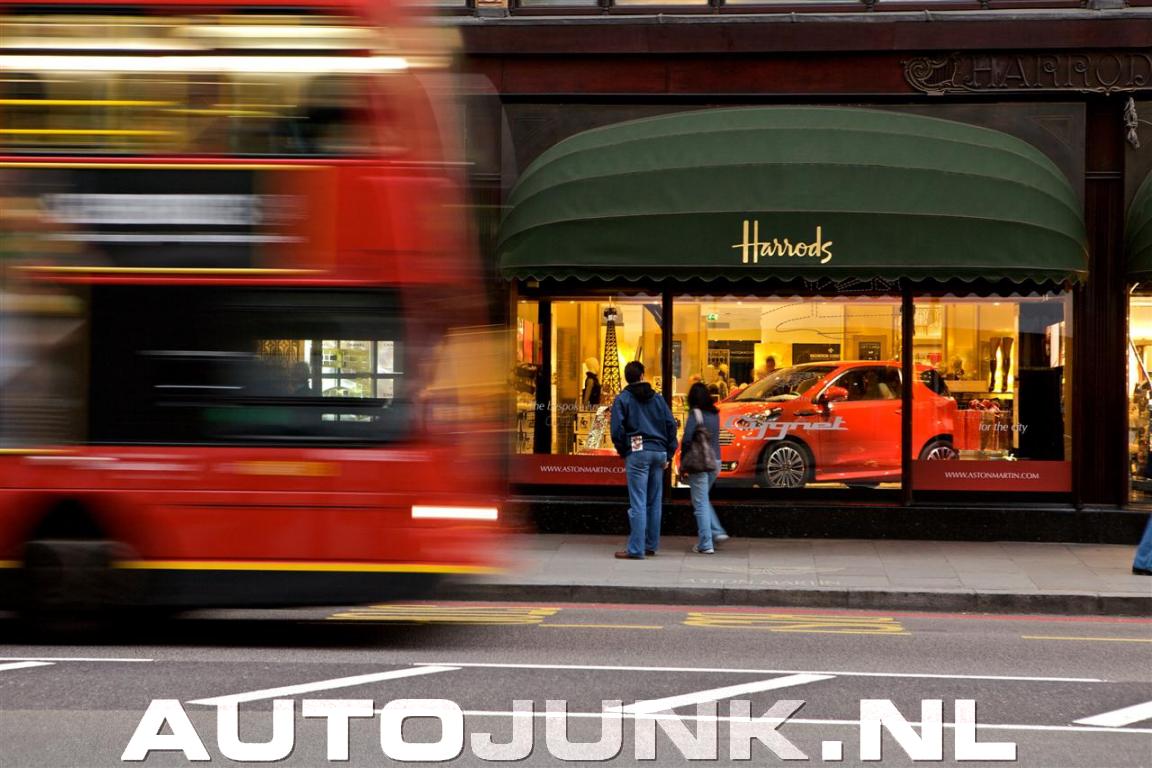 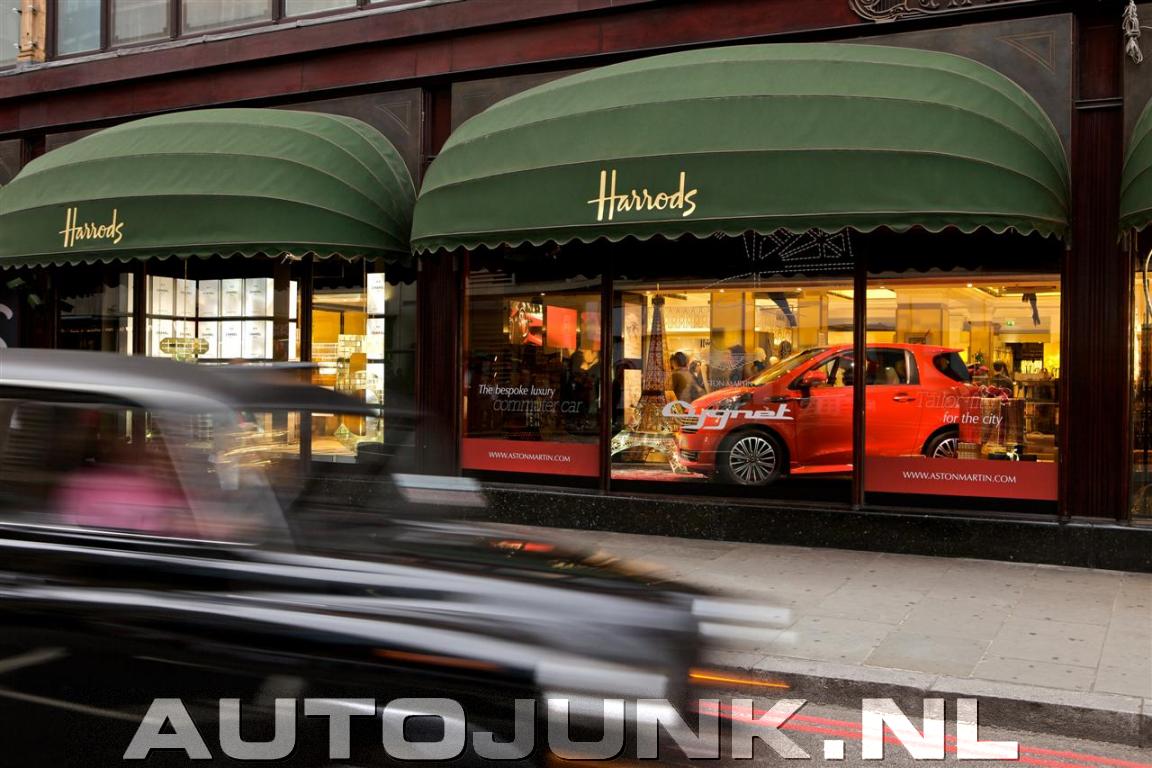 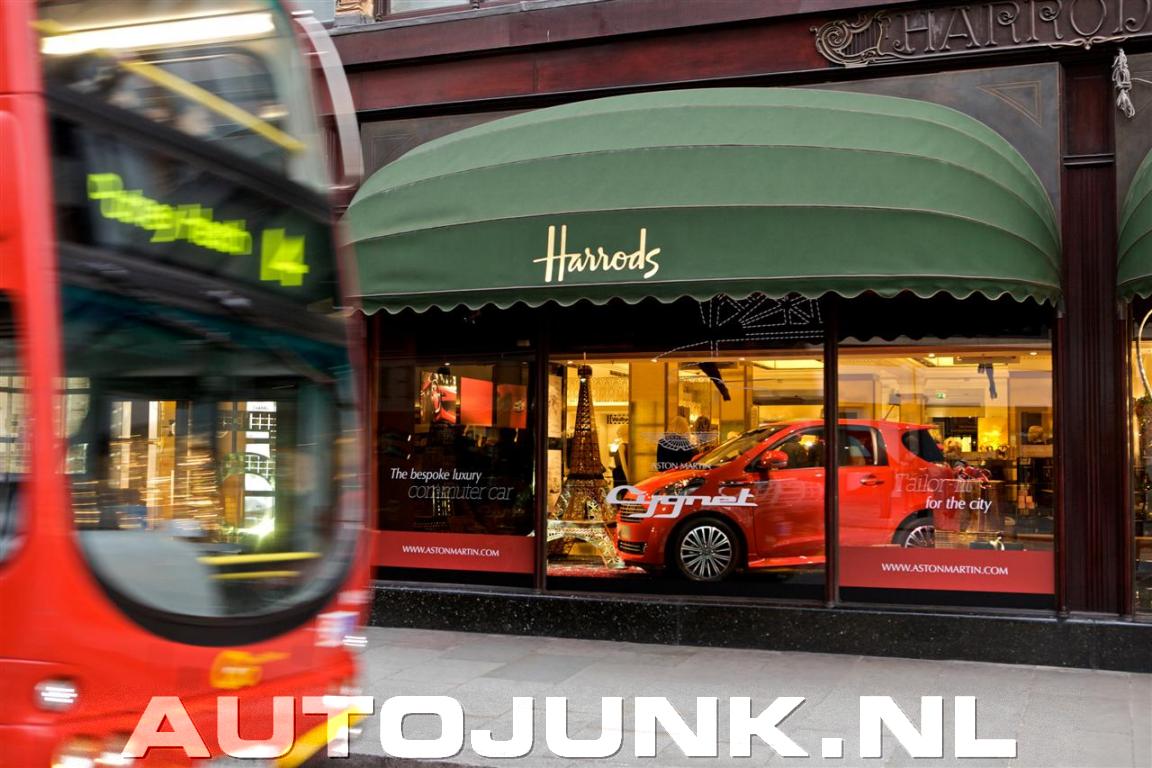 15 November, 2010 – Aston Martin’s new luxury city car; Cygnet – which will go into production in 2011 - is making its global debut at Harrods in Knightsbridge, the world's most prestigious department store.Occupying a prominent position in the store’s iconic Brompton Road window display in central London, Cygnet is perfectly placed in the heart of the city, an ideal spot to experience this ultra-compact, high luxury city car in its production-ready form for the very first time.Aston Martin's characteristic design language is clearly referenced in Cygnet’s compact two-door body. Signature details like the famous aluminium grille, side strake and inverted rear lights create a distinguished, neatly-proportioned form and a discretely stylish statement. Painted, trimmed and assembled by the same technicians and craftspeople that create Aston Martin’s award-winning range of sports cars, Cygnet is the ultimate way to explore the contemporary city.Cygnet is highly appropriate for the environment for which it has been designed. With ample performance and manoeuvrability for urban use, it is light, compact and fuel-efficient yet also capable of carrying up to four people, all while providing Aston Martin's accomplished levels of luxury, comfort and quality. Cygnet, the tailor fit solution for the city, will help drive Aston Martin into an exciting future.Harrods is a suitably central location for this important debut. Located in the heart of Knightsbridge, the celebrated store has been at the forefront of luxury retail since it was founded in 1849. Offering the finest merchandise from this most prominent of London locations, as well as from satellite sites around the world, Harrods provides unrivalled choice and a bespoke personal service that attracts loyal customers as well as a host of international visitors.Harrods has over 360 departments, spread over seven floors of its iconic Knightsbridge building. The store's vast selection of merchandise ranges from international haute couture to cutting edge technology, as well as an unrivalled choice of exquisite food and drink in the world famous Food Halls. Harrods also offers exclusive services including By Appointment Personal Shopping and Beyond to provide a total lifestyle experience. The Harrods ethos of ‘anything is possible’ sets out to surpass the desires and expectations of its customers.The Aston Martin Cygnet will go into production in 2011 at the company’s global headquarters in Gaydon, Warwickshire in England. The car will be the eighth major production car Aston Martin has introduced at its state-of-the art facility since 2004, offering further evidence of the company’s ongoing commitment to British manufacturing, backed-up by a dedicated local workforce and supplier network.Cygnet will be available to view at Harrods until Saturday 11th December with the car on sale now through Aston Martin’s European dealership network.